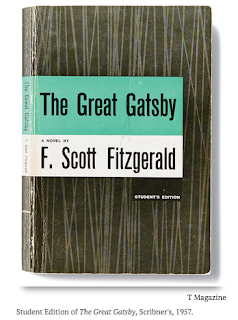 We recently tweeted about a very interesting interactive timeline about The Great Gatsby, created by Andrew Newman, associate professor of English and History at Stony Brook University, but we wanted to write a brief blog to call more attention to his excellent work.

His interactive timeline allows readers to consider the ways in which “the frames of reference, or `horizons of understanding’” for Fitzgerald’s novel have changed over time.

Newman’s critical point, which he also articulates in “`Lifestyles of the Rich and Famous’: The Great Gatsby in the 1980s” (published in Changing English, and linked to - outside the journal paywall - at the end of Newman’s timeline), is that while the text of Gatsby has remained unchanged, what it “has meant to generations of readers” and how that meaning has been shaped “by these readers’ own individual and collective experiences” is a fascinating lens through which to examine this still nearly ubiquitous novel.

Newman’s approach builds on the work of foundational literary scholars of reception theory like Jane Tompkins, who, for example, discovers that while Nathanial Hawthorne seemingly remained a constant in the literary canon, his position there is not a testament to the idea that his classic work has withstood the test of time and transcends the “limitations of its age.” Tompkins discovers, for example, that The Scarlett Letter is considered a great novel at different points in time, but that at each moment, “it is great for different reasons.” An “enduring work of American literature is not a stable object possessing features of enduring value” but a text that “because of its place within institutional and cultural history” has come to be valued as excellent, but excellent for different reasons at different moments in time.

Using an approach grounded in reception theory, Newman examines curriculum guides, classroom editions, and articles in pedagogy journals. He considers, moreover, how students reading the novel in the context of the 1974 film adaptation. starring Robert Redford and Mia Farrow, may have been influenced by its interpretation. How is our students’ understanding of the novel today shaped by the vision of Baz Luhrmann’s 2013 film?

One favorite moment in his piece is when he discusses a quote in The New York Times by Robin Leach of Lifestyles of the Rich and Famous. Leach remarks, “there’s more fascination with a Gatsby in a depression, when no one’s rich, than in a time when everyone’s rich.” As Newman notes, Leach is “wrong”: “there was no interest in Gatsby during the Great Depression; it became popular during the post-war era, when there was an increasing proportion of stakeholders in the American Dream.”

Indeed. What a brilliant reminder that the texts we read are not timeless, enduring classics that have always been and always will be read and valued by readers everywhere! No!

That said, given that we are, as Newman notes, approaching the kind of inequality of the 20s, in which the American Dream seems less and less powerful as a foundational myth of America, will Gatsby retain its popularity? Will we, English teachers, students, and readers, abandon Gatsby at this historical moment? Or will this text emerge as an “excellent,” “enduring” novel because of its ability to speak to the concerns of our current moment: xenophobia, anti-immigrant fervor, and anxiety over the decline of white male power?

Regardless, Newman’s research into the frames of references by which Gatsby’s readers have over time made sense out of Fitzgerald’s novel is such a valuable way for us to allow our students to demystify and deconstruct the status and stability of Gatsby as a cultural object.
Posted by Using Informational Text at 8:35 PM