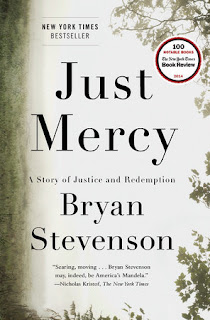 There’s a blurb on the cover of Bryan Stevenson’s Just Mercy: A Story of Justice and Redemption that compares Stevenson to Atticus Finch: “Not since Atticus Finch has a fearless and committed lawyer made such a difference in the American South. Though larger than life, Atticus exists only in fiction. Bryan Stevenson, however, is very much alive and doing God’s work fighting for the poor, the oppressed, the voiceless, the vulnerable, the outcast, and those without hope.”

As readers invested in thinking critically about the character of Atticus in TKAM and wary of the idea of Atticus as someone who “made such a difference in the American South,” this blurb strikes us as misleading, to say the least. Atticus, remember, did not strive to defend Tom Robinson, nor did he do so successfully. The idea that we celebrate this lawyer as some kind of hero of civil rights is a bit odd, no? (Stevenson himself notes this irony.)

But Stevenson’s book, his tale of his own work as a lawyer defending Walter McMillian, a native of Harper Lee’s Monroe County, forces the comparison in a way that is intriguing for readers of TKAM.

First off, Walter, like Tom Robinson, grew up in one of the black neighborhoods outside Monroeville. While this community may have celebrated Lee’s novel, transforming an old, local courthouse into a “Mockingbird” museum and producing a local stage version of the novel, Walter’s story suggests that Lee’s ideas may not have been fully embraced.

As Stevenson tells the story, when Ronda Morrison, the 18-year-old daughter of a white, wealthy family was found dead in 1986, Walter McMillian was arrested.

Walter had a few things going against him. He was poor and black. And he had engaged in an interracial, adulterous affair with a white woman.

Ultimately, all those factors play a role in this horrifying tale of injustice. There’s police misconduct, corruption, and incompetence. Unbelievable elements include the fact that Walter is placed on death row while he is a pretrial detainee. As Stevenson notes, this is “almost never done.”

The piece of Walter’s story that most resonates with TKAM is his conviction for this murder (no spoiler: this happens quite early in the otherwise quite suspenseful book). The connection with TKAM is the craziness of that conviction. Just as Atticus and everyone in Maycomb knows that Tom Robinson couldn’t possibly have choked Mayella with his damaged left arm, everyone in Monroeville knows (or should know) that Walter couldn’t have killed Ronda. On the day of the murder, he was at a fish fry at his house, with members of his family and at least a dozen church parishioners.

The ways in which law enforcement manufactures evidence, primarily through manipulating people to testify against Walter, is a fascinating piece of the story. And readers will be engrossed in Stevenson’s discussion of his own journey as a young lawyer and his broader fight to serve death-row inmates and address what he identifies as the injustice of poverty.

But Stevenson draws one scene in his book that drives home the horror of Walter’s and Tom’s conviction – and in a way that Harper Lee does not capture. Stevenson, as part of his defense of Walter, goes to meet two dozen of his family members. We quote the passage at length, with some excerpting:

“It would have been so much easier if he had been out in the woods hunting by himself when that girl was killed.” Armelia Hand, Walter McMillian’s older sister, paused while the crowd in the small trailer called out in affirmation. . . .

“At least then we could understand how it might be possible for him to have done this.” . . .

“But because we were standing next to him that whole morning . . . We knowwhere he was. . . . We know what he was doing!” People hummed in agreement as her voice grew louder and more distraught. It was the kind of wordless testimony of struggle and anguish I heard all the time growing up in a small rural black church. . . .

Her face twisted in pain. “I feel like I’ve been convicted, too.”

The small crowd responded to each statement with shots of “Yes!” and “That’s right!”

“I feel like they done put me on death row, too. What do we tell these children about how to stay out of harm’s way when you can be at your own house, minding your own business, surrounded by your entire family, and they still put some murder on you that you ain’t do and send you to death row?” (92-93)


This passage about injustice in relation to a 1986 murder is so full of possibilities for readers of TKAM trying to think critically about Harper Lee’s meditation on injustice in relation to a rape in the 30s. Why doesn’t Lee include a scene between Atticus and the members of Robinson’s family and the broader black community in Maycomb after the conviction? What would that scene look like? What would Tom’s wife have said? How would Tom’s children have responded? How would their lives have been disfigured by the brutal injustice that not only took their father’s life but instilled in them the idea that they were also convicted?

What Stevenson does here, in a way that Lee does not, is to highlight how one miscarriage of justice is an act of terrorism enacted on an entire community. That’s the work that lynching was designed to do. A lynching wasn’t simply intended to punish one individual but to terrify a community. That’s why lynchings were such public, publicized spectacles: so the message of terror would spread far and wide. Tom escapes lynching in TKAM, thanks to Scout’s disarming interaction with her schoolmate’s father, Mr. Cunningham, but Tom’s death by seventeen bullets while in government custody surely has a similar chilling effect on the African-American community in Maycomb.

Reading Just Mercy alongside TKAM underscores, one more time, the ways in which Scout’s blinkered perspective can’t or doesn’t expose the ugliest elements of Lee’s story. But with our students, by juxtaposing TKAM with an excerpt from Just Mercy, we can help our students do that work and see what Scout does not.
Posted by Using Informational Text at 5:37 PM