A little summer Gatsby reading: Corrigan's So We Read On 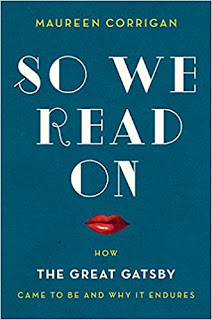 If you teach The Great Gatsby, put Maureen Corrigan’s So We Read On onto your summer reading list. It’s chatty and fun, full of all sorts of tidbits and details about Fitzgerald, sources and context for the novel, the initial publication and reception of the text, and the ways in which Gatsby made it into the literary canon and our many classrooms.

This is a compelling and refreshing read, not a stuffy academic treatise; Corrigan is thoroughly honest and highly engaging about her own relationship to Gatsby. She writes in the very first paragraph about how, as a high-school senior, she thought it “was a boring novel about rich people” (3). Susan didn’t fully appreciate Gatsby until college after being roundly unimpressed by it in high school, and Audrey still sometimes finds Fitzgerald’s text a frustratingly claustrophobic examination of a narrow slice of society.

So We Read On is that rare and charming combination: both scholarly and totally fan-girly in its adult enthusiasm for Gatsby. Corrigan gushes that The Great Gatsby is “the Great American Novel, if there is such an animal” (8) and “as perfect as a novel can be” (9). And she worries about how students are and are not reading Fitzgerald’s work: “It’s not the green light, stupid; it’s Gatsby’s reaching for it that’s the crucial all-American symbol of the novel” (5).


This latter comment, of course, is in alignment with our visions. Like Corrigan, we think students need to be thinking about big ideas and essential questions when they read literature, and our volumes on using informational text, including our latest on Gatsby, are designed to help teachers guide their students away from the small questions about the green light and onto the bigger questions about what all these symbols – the green light, the mongrel dog, the gray child – illustrate about the vision of America and American possibility offered by and thwarted within the novel.

What is probably most infectious about Corrigan’s volume is her humility as an always-eager reader and thinker about Gatsby. For example, despite the fact that she has taught Gatsby at Georgetown year after year, Corrigan describes asking a group of students at her alma mater high school in Queens about why Daisy cries when she sees Gatsby’s pile of shirts. Corrigan admits, “I often ask classes that question because I’m never sure what that scene means” (293). And then she writes, with admiration of the answer a student offers:

A dark-haired girl raises her hand and says something I’ve never thought of: “She cries because she sees that Gatsby is just like Tom now. The poor boy she loved is gone. He’s rich like Tom, so he’s changed.” Her comment stops class discussion in its tracks for a few minutes because it feels so emotionally smart. I’ve never thought of Gatsby “becoming” like Tom. I’m not sure if she’s right but I love that this novel, like all great novels, spawns endless sharp interpretation. (293)

So read Corrigan this summer, if you haven’t already, and embrace some of the tantalizing ideas and writing and discussion prompts her text offers. Here are just four that we gleaned:


1. “The Great Gatsby is America’s greatest novel about class. In fact, it’s the only one of its canonical peers (Moby Dick, Huckleberry Finn, To Kill a Mockingbird, Invisible Man, Beloved) that foregrounds class instead of race” (16). Do you agree? How do the anti-immigrant, anti-Semitic, and racist moments in Gatsby connect with its broader narrative of class?

2. Corrigan describes giving a “contrarian talk” with the title “The Great Gatsby: Just How American Is This Great American Novel?” What do you think she means? In what ways, for you, is this novel distinctly American? What narrative of America does it offer? How compelling is that narrative in our current historical moment?

3. Corrigan tells us that Fitzgerald struggled with the title and when the novel was in production called it “Trimalchio,” after a character in the first-century Roman work Satyricon, by Petronius. She explains that Trimalchio “is a freed slave who’s climbed up the ladder of Roman society through hard work” (201). What do you think of “Trimalchio” as a title instead of Gatsby? Corrigan also informs us that Fitzgerald wasn’t “fond of `The Great Gatsby’ because he said that Gatsby wasn’t really great” (201). Do you think Fitzgerald was right to be skeptical about the title of his novel? Do you agree with Fitzgerald that Gatsby isn’t really great? Why or why not? Can you think of a better title?

4. Corrigan writes that Fitzgerald was “aiming for a big statement about America” (300). She notes that “So many immigrants had poured into America via New York City by the early 1920s. . . . Fitzgerald was a man of his time; he was nervous about those alien hordes, but he also understood their yearning. Could America deliver on its promises?” (301). What answer do you think Fitzgerald offers to this question at the end of Gatsby? Do you see echoes today in Gatsby’s nervousness about “alien hordes”? Do you think America today is delivering on its promises?
Posted by Using Informational Text at 1:50 PM No comments: 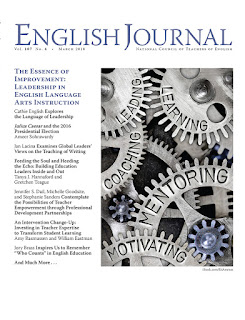 In the March 2018 edition of English Journal, Ameer Sohrawardy offers a compelling article about the use of nonfiction in connection with Julius Caesar. Sohrawardy writes about using a piece of political commentary written by Andrew McGill about West Virginia coal miners and the election of Donald Trump. Sohrawardy reflects on how the discussion that followed, in a class comprised primarily of Clinton supporters, “rehearsed many of the dyadic frameworks” of the election, oversimplifying frameworks that were “already being questioned by political analysts” (64).

This exercise, it strikes us, reflects the dangers of using nonfiction simply to find (and perhaps exploit) relevance in literature. Sohrawardy notes that her students were willing and able to extend their analysis of McGill’s piece to Caesar, making interesting connections, but they couldn’t see the limitations of the analogy. Their reading of McGill, in other words, enabled them to discuss Caesar in the context of the Trump election, but that discussion didn’t productively complicate their reading of either the election or the play.

Relevance is critical, and we do want our students to make interesting connections between our world and the literary texts we ask them to read. But Sohrawardy is right to ask for more from this kind of contextualizing reading.

Next, Sohrawardy asked the students to read excerpts from Matthew Crawford’s Shop Class: An Inquiry into the Value of Work (2009). This text, as Sohrawardy explains, focuses on the dislocation and diminution of manual competencies in a fragmented and alienating 21st century economy. More importantly, the class discussion of Crawford’s work enabled Sohrawardy’s students to rethink the election, McGill’s ideas about the election, and Shakespeare’s investigation of the discontent among the Roman citizens.

Most compellingly, Sohrawardy writes that the readings “had begun to attune us … to listen” to the “fleeting, fugitive voices in our own time” (66). These are the skills we want to cultivate in the humanities: the ability to find and think through more context, to hear unexpected voices and ideas, and to rethink our preconceptions.

So, the lesson from Sohrawardy is clear: when we seek out a nonfiction reading to pair with a literary text, we need to be careful. Relevance is great for engagement. But we can’t stop there. Our pairings should help our students and ourselves continue to find the unexpected, even in texts like Caesar that we’ve read time and again.
Posted by Using Informational Text at 6:32 PM No comments: