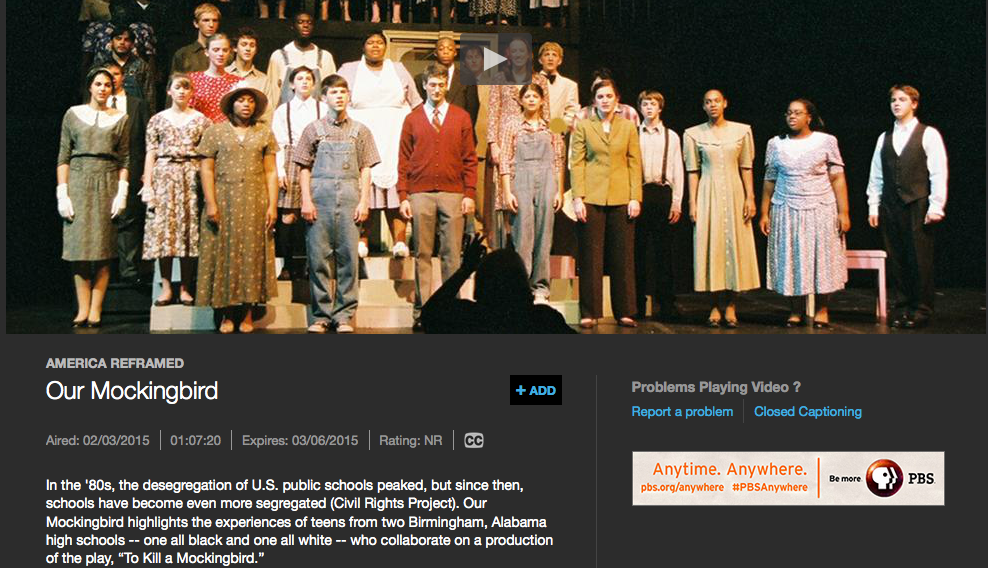 On February 3, 2015, PBS’s “America Reframed” aired Sandra Jaffe’s “Our Mockingbird.” If you missed it, the film is available on the web. Watch it now!

The film is several stories at once.

First and foremost, it is the story of two high schools, one black and one white, in what the students themselves identify as our still somewhat segregated America. They come together from two high schools in Birmingham, AL -- Mountain Brook High School and Fairfield High Preparatory School -- to put on a musical version of Harper Lee’s novel.

The film is very much interested in the students’ apprehensions. They are nervous around each other: unsure what to think and how to act, anxious about how they are perceived. The white students, for example, notice the lack of space and money for drama at the predominately African-American school; they also worry about being perceived as rich and stuck up.

As the group rehearses, however, they clearly bond over what Mockingbird means to them individually and collectively and how it remains relevant today. They realize how, all these years after desegregation, they live in separate worlds and rarely have to interact with people outside their racial comfort zones. With the enthusiasm of the young, they welcome the opportunity the production allows them to do so.

The film doesn’t highlight any of the internal dramas of the troupe (what high school theatrical production is without drama, regardless of the racial mix?); instead, it celebrates the coming together of these talented and thoughtful young adults. We seem them chatting, hugging, and, in one scene, reflecting on the fact that they can be together in public, black and white, arm and arm, without fear of reprisal. It’s irresistible. And who can disagree with the teachers when they suggest that this experience will be life-changing for the kids involved.

In addition, the film focuses on Alabama and its Civil Rights history, fleshing out the places and events so important to the world in which Harper Lee lived when she wrote her story: the bombing of the 16th Street Baptist Church, the 1963 Children’s Campaign, and Kelly Ingram Park, where police used fire houses and dogs on young protesters. The student actors visit these sites and the film shows them learning and digesting their local history and the context of the text (and of Lee’s writing of the text).

Finally, the film includes a variety of notable voices reflecting on both our Civil Rights history and on the impact of Mockingbird, including Doug Jones, the former U.S. Attorney who prosecuted the 16th Street Baptist Church bombing; various southern writers and journalists including Diane McWhorter, Rick Bragg, and Cynthia Tucker; Morris Dees, co-founder of the Southern Poverty Law Center; Mary Badham, who played “Scout” in the original film; and former Attorney General Eric Holder.

So, watch this film. Watch it for inspiration as we see amazing educators transforming the lives of these young people and carrying on the legacy of their Civil Rights predecessors in Birmingham. This film should raise any educator’s spirit in these days when it isn’t easy to be a teacher.

And use this film. Instead of sticking in the film version of Mockingbird as a treat after students have read the book, use this documentary to drive home the point of why Lee’s novel mattered and continues to matter. Your students will be transported by Jaffe’s amazing film and the amazing work of these educators and young people.
Posted by Using Informational Text at 7:28 PM No comments:

Email ThisBlogThis!Share to TwitterShare to FacebookShare to Pinterest
Labels: mockingbird 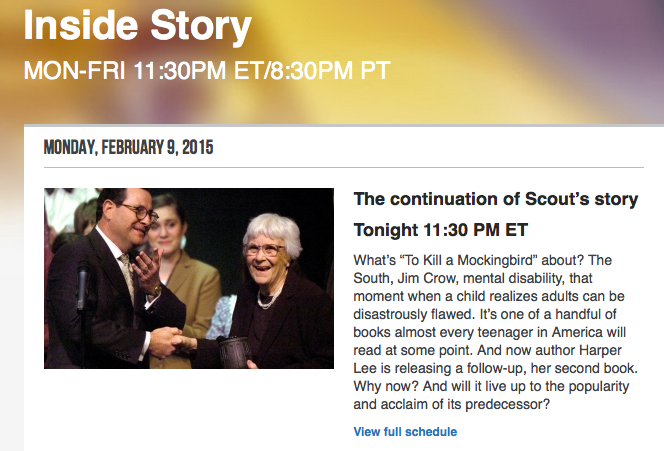 Audrey had the opportunity to speak on Al-Jazeera America’s daily news discussion show Inside Story with Ray Suarez on February 9. The occasion for the segment was the announced release of Harper Lee’s new novel, Go Set a Watchman, due out in July 2015 from HarperCollins. Audrey was part of a panel, including Lee biographer Charles Shields and Los Angeles Times writer Carolyn Kellog. (We’d love to share the video, but, unfortunately, Al-Jazeera can’t make it publicly available due to its cable agreements.)

The new novel is a big story for a range of reasons, including the fact that Lee has been a literary recluse. To Kill a Mockingbird is a widely beloved text, so many, many readers are thrilled about this publishing event.

During the program, Ray asked Audrey about the fact that Mockingbird continues to be so widely read and taught. It’s a curious phenomenon. Why do some texts become canonical? Why do teachers continue to teach certain texts year after year, and in this case generation after generation? Perhaps it’s because Atticus represents, in some ways, the best of what we want to imagine about America: a just, courageous man willing to stand up despite public opprobrium.

But, let’s be clear. Atticus’s heroism isn’t so simple. Remember, he doesn’t volunteer to defend Tom Robinson; he’s unequivocal about the fact that he doesn’t want the case: “I’d hoped to get through life without a case of this kind, but [Judge] John Taylor pointed at me and said, `You’re It.’”
Mockingbird may offer us the attraction of a fairly simple story of good and bad. Tom Robinson is good; Bob Ewell is bad. Issues of race are usually a lot more complicated than that and can be a lot harder to navigate.

A skilled teacher can unpack many of the nuances in Mockingbird, but it isn’t easy. Why does Lee make a point of including Walter Cunningham in the group of men who set out to lynch Tom Robinson? How does Cunningham’s presence in this group and his willingness to be talked down from the brink by Scout relate to his social status as a proud man, caught up in the economic tangle of an entailment and the Depression? What are we to make of Lula, the combative African-American woman who confronts Calpurnia and makes clear that the Finch children are not welcome at the African-American church?

For a skilled teacher, this is a fascinating text full of complexity about race and many, many issues.

The bigger point, however, is that teaching literature is always hard. Whether we are teaching Mockingbird or any other text, it’s not easy to get students to make connections and care about the text. If we forget to ask ourselves why we are teaching these texts and why they matter, how can we expect our students to be able to do the same?

For us, the informational text mandate of the Common Core is the welcome reminder we need. When we think about what kinds of informational text connections we want to make with Mockingbird – for example, to the issue of lawyers willing to defend the detainees at Guantanamo – we make clear, for ourselves and our students, why this text still matters.

Meanwhile, we are super curious and excited about what Go Set a Watchman has to offer. How can we not be?
Posted by Using Informational Text at 7:27 PM No comments:

We heartily agree: “The Common Core Has Not Killed Literature” 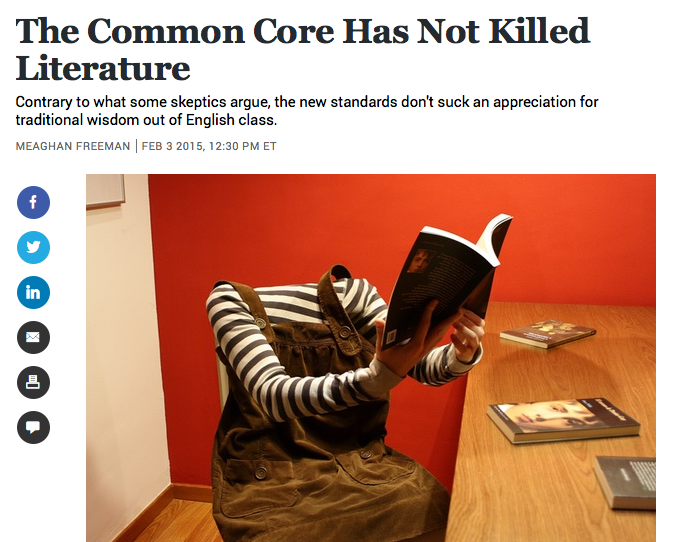 Bravo to Meaghan Freeman for her wonderful new piece in The Atlantic: “The Common Core Has Not Killed Literature.”

Freeman, a 15-year veteran of the middle-school English classroom, takes up the ongoing debate about informational text in the Common Core and offers her view – that the Common Core standards ask for an appropriate “balance” between informational and literary texts. This balance is so crucial because, as she reminds us, most of the students in her class will not end up as English majors or English scholars. Whatever they will end up studying and doing in their future education and careers, however, they will need to be able to tackle not just literature but a wide variety of texts.

So Freeman identifies her task: to expose her students to “challenging and diverse texts.” And she celebrates what she sees as the autonomy inherent in how the standards allow her, as a teacher, the freedom to find creative connections between fiction and nonfiction. She mentions, for example, using scientific articles about genetic engineering in conjunction with “Harrison Bergeron.” Teachers all over the country are, like Freeman, finding these interesting kinds of textual connections. And when they do this work in the classroom, the juxtaposition of fiction and non-fiction doesn’t take away from the teaching of literature; it allows Freeman and the teachers like her to give students what Freeman rightly identifies as a “rigorous learning experience.”

Perhaps the scientifically-inclined student, who might never before have been particularly interested in literature, will discover and come to appreciate in Freeman’s classroom how writers of fiction have tackled issues of science and scientific ethics. Perhaps that young student will be transformed into a long-term reader of science fiction. But even if he or she does not emerge from Freeman’s classroom as a fiction-reader, teaching “Bergeron” together with articles about genetic engineering will allow all students to think and make connections about ideas that transcend the walls of the English classroom.

And that’s our most important goal as teachers.

While Freeman rejoices in how the standards give her freedom to do her job of creating learning in her classroom, she does admit it’s a challenge. Adding non-fiction into her curriculum, and doing so in ways that allow her to enhance that literary curriculum, is not easy. Nor is it easy to teach these new kinds of texts. Freeman wants “appropriate and valuable strategies to help [her] kids comprehend and analyze nonfiction texts.”

We have some to offer, and many teachers are working hard at creating materials to meet this new challenge.

Let’s also note that if language arts teachers need this kind of help, so too do the teachers in the other content areas, who are now also responsible for using a diverse range of texts in their classrooms. The science teacher, for example, is surely struggling as well with how to use scientific articles about genetic engineering in his classroom in conjunction with the science textbook and the classroom experiments he is used to employing.

Perhaps this is the greatest opportunity offered by the Common Core: teachers across the disciplines can reach across the hallway to share ideas for how to teach literacy and content through cross-disciplinary lessons.

We have ideas about how to begin those conversations and how to make that work easier.


What’s clear, however, is that teachers like Meaghan Freeman, with a little time, are making the best out of the Common Core and transforming their classrooms into places of “rigorous and diverse learning for every student.” Bravo, again.

One final note: We are excited to share that Audrey will appear on Monday night at 11:30pm on Al-Jazeera America’s daily news discussion TV show, Inside Story, with Ray Suarez. The occasion for the program segment is the announced release of Harper Lee’s new novel, Go Set a Watchman, due out in July 2015 from Harper Collins. Audrey was part of a panel, including Lee biographer Charles Shields, and was asked to address how and why Lee’s To Kill a Mockingbird is taught in the United States today.
Posted by Using Informational Text at 3:57 PM No comments: