As we move into a new school year defined by uncertainty, it seems more imperative than ever to try to help our students (and ourselves) make sense of the world. But with so much going on right now – the COVID-19 pandemic, civic unrest in response to systemic racism, widespread economic distress, a contentious political climate and presidential election – it’s hard to know where to start and easy to become overwhelmed. This is especially the case given that many of the intertwined aspects of the current global crisis may impact some or all of our students very differently than they affect us. As many have said in recent months, “we may all be in the same storm, but we are not in the same boat.”

But, even amid such upheaval, we have several enduring things going for us. First, our classrooms – though they may now be partially or completely virtual – are spaces where we can help students (and ourselves) engage in the difficult conversations needed to understand and address the issues shaping our lives – including the disparate ways these issues shape the lives of different groups of people and why. Second, literature still provides a safer space to approach such discussions, centered upon fictional events in fictional worlds that prompt us to build empathy with characters whose lives and experiences may be very different from our own. Third, putting literature in dialogue with informational text enhances the relevance of the literary work while helping us understand our present circumstances with the benefit of new knowledge and different perspectives.

So, when we heard NPR’s July 21 story on the Trump administration’s plan to repeal and replace a rule enacted during the Obama presidency to address racial discrimination in housing, we immediately thought of it as a timely update to our units on housing discrimination in relation to A Raisin in the Sun. This article on this issue also provides an occasion to look at how government policies can either combat or sustain systemic socioeconomic inequality.

As the article explains, the 2015 Affirmatively Furthering Fair Housing rule required municipalities to identify patterns of discrimination in housing and develop a plan to address them. Such a plan might include changing zoning regulations to allow more affordable housing. However, the Trump administration has deemed this Obama-era rule an example of government overreach that has had a “devastating impact on these once thriving Suburban [sic] areas,” according to a June 30 tweet by Trump. 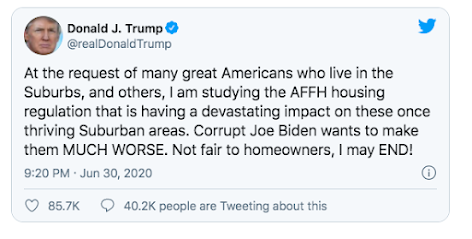 Reporter Danielle Kurtzleben characterizes the White House’s plan to replace the rule as an attempt by Trump to win over white voters in suburban districts. She quotes UCLA professor Lynn Vavreck, who describes Trump’s campaign against the AFFH rule as “racializing the idea of housing” and championing the socioeconomic exclusivity of the suburbs. A claim by Trump during a tele-townhall meeting – that Democrats want to "eliminate single-family zoning, bringing who knows who into your suburbs, so your communities will be unsafe and your housing values will go down” – appears to support Vavreck’s argument. 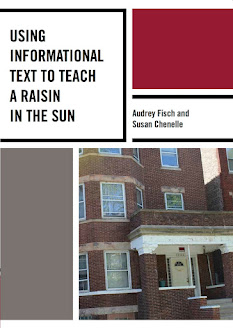 Kurtzelben’s quite readable article -- especially the central section, “What does the AFFH rule do?” -- could provide a timely hook into our units on housing discrimination past and present in dialogue with A Raisin in the Sun (or our blog for the New York Times Learning Network). The question-based headers that label each section of the article could also facilitate a jigsaw reading of it, with a different group of students responsible for reading and explaining each respective section.

In the past, when we’ve discussed housing discrimination with students, even those who have been directly impacted by housing discrimination, they were often surprised to learn that the housing policies that have shaped their lives are not immutable but instead the result of specific actions taken by people over time. And while these conversations have helped students understand a bit more about their own world, they make A Raisin in the Sun seem all the more relevant, and “not just a story,” as one student put it.

For us, this has been the most rewarding kind of teaching, and we firmly believe that it still can be, even with all that’s new and uncertain about how teaching and learning will be carried out for the forseeable future.

Indeed, this approach enables us to address two immediate concerns that might otherwise seem at odds with each other: supporting students’ social emotional well-being and addressing any “learning loss” that may have occurred over the last stressful months. Indeed, an introduction to trauma-informed teaching created by WE Teachers encourages teachers to model and give students the opportunity to engage in the healthy acquisition of knowledge (i.e., identifying credible sources, avoiding information overload, reading critically, etc.) as a way of managing anxiety and providing the basis for empowering students to take action.

More than ever, our students need us to equip them with the knowledge and skills to actively engage with the world and its so many injustices and opportunities.